I've got to fly today on down to Baton Rouge 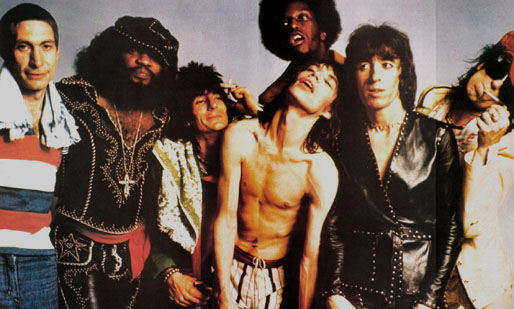 January 19, 1975: Keith Richards contributes to a recording session by Alexis Korner in London, England. Keith
Richards and Anita Pallenberg are by now living at Ron Wood's home, The Wick.


January 22-February 9, 1975: The Rolling Stones, with Billy Preston, start rehearsing guitarists and
resume recording sessions for Black and Blue in Rotterdam, The Netherlands, using the Rolling
Stones Mobile Studio. Guitarists showing up include Jeff Beck, Wayne Perkins and Rory Gallagher.
The Rolling Stones start work on Crazy Mama, Slave, Melody and Worried About You among others.


March 1975: The U.S.S.R. denies the Rolling Stones' demand to perform in that country, claiming they would not
help Russians to achieve self-perfection.


Mid-March 1975: Mick Jagger jams with Ron Wood and members of Wings at the Record Plant in Los Angeles.


Early April 1975: Ron Wood's home in Richmond, Surrey, is busted while he is away and his wife Krissie Wood is
charged for possession of cocaine.


April 14, 1975: The Rolling Stones issue a press statement announcing Ron Wood will accompany the
group on their upcoming tour of the Americas.

May 1, 1975: The Rolling Stones, with Ron Wood, announce their 1975 Tour of the Americas by
performing Brown Sugar on a moving flatbed truck down 5th Avenue in New York City.

May 17, 1975: Mick Jagger smashes his hand through a restaurant window in Montauk, Long Island, requiring
twenty stitches on his wrist.


May 31, 1975: The Rolling Stones are in Baton Rouge, Louisiana, going through the last rehearsals.


June 1, 1975: On Ron Wood's 28th birthday, the Rolling Stones open their 1975 tour of North American
stadiums and arenas with two concerts at Louisiana State University in Baton Rouge, where they
perform for the first time. This is the only time on the tour the Rolling Stones perform two concerts
on the same day, a frequent occurrence on previous tours.


June 3-6, 1975: The Rolling Stones perform concerts in San Antonio, Texas and Kansas City to 53 000
at Arrowhead Stadium. The inflating penis balloon during Star Star is not used in San Antonio,
following police pressure.


June 8-18, 1975: The Rolling Stones swing through the north, performing in Milwaukee, Wisconsin;
St. Paul, Minnesota for the first time; Boston; Cleveland to a record 82 000; Buffalo, New York; and
Toronto for two concerts at the Maple Leaf Gardens, the sole Canadian stop on the tour.


July 1975: A jury fails to reach a verdict at Krissie Wood's trial in England. The trial is reset for the following year.


July 4, 1975: The Rolling Stones perform in Memphis, Tennessee on Independence Day, with the
penis balloon inflated against police wishes.


July 5, 1975: On a drive down to Dallas, Keith Richards and Ron Wood are arrested for possession of an illegally
concealed dagger in Fordyce, Arkansas, then released on bail. Cocaine is also found in the trunk of the car but
Keith & Ron manage to escape charges. The weapon charge is later dropped.


July 6, 1975: The Rolling Stones perform at the Cotton Bowl in Dallas, Texas.


July 9-13, 1975: The Rolling Stones perform five concerts at the Forum in Los Angeles, California. George
Harrison and Ringo Starr are among the celebrities attending some of the concerts.


July 15, 1975: Model Uschi Obermeier, whom Keith Richards had dated in 1973, rejoins him on tour in San
Francisco for a week, before leaving him.


July 30-August 2, 1975: The Rolling Stones play concerts in the southeast, in Atlanta, Georgia;
Greensboro, North Carolina; and Jacksonville, Florida at the Gator Bowl.


August 2, 1975: The Rolling Stones announce they are cancelling what would have been their first-ever
concerts in Latin America (Mexico, Brazil and Venezuela).


August 4-6, 1975: The Rolling Stones perform in Louisville, Kentucky and, for the first time, Hampton,
Virginia.


September 3, 1975: Bill Wyman and Ron Wood jam at a Peter Sellers party in Los Angeles with Keith Moon, David
Bowie and others.


October 16, 1975: Keith Richards' 1973 France conviction for possession of heroin and cannabis is overturned,
because he has since undergone detoxification treatment.

Return to Time Is On Our Side main page